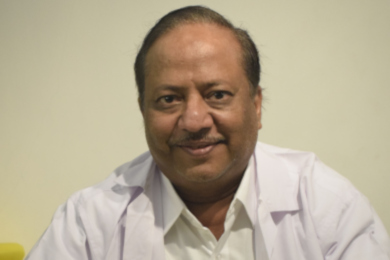 Dr.Arun Chamria was also the first Indian Dentist to be associated with Computer Guided Implantology and learned the technique at Grenoble France much before the said technology being introduced by Nobel Biocare at Las Vegas in December 2005. Dr.Arun Chamria also learned the most advanced and latest technology in dental implants known as “ All on 4 “

Dr. Arun Chamria is one of the first dental surgeons to have light cure equipment in 1983 for cosmetic dentistry. He was Congratulated and Chosen for expertise in Implant community for paper presentation at World Congress on Oral Implantology (Highest platform in the World) on How to re-treat failed immediate load implants (‘Same day Fixed Teeth with dental Implants”) at Honolulu-Hawaii-U.S.A. in 2004. In the said conference the technique of ‘Same day fixed teeth with dental implants’ was accepted and a consensus was established. Previously the teeth were put after 3 to 6 months of implants insertion. This newer technique in most of the patients does not require the normal surgery of cutting the gums and putting sutures. It is called the ‘flap-less technique’. The requirement of anaesthesia is very little and pain is 1/10th of the what one experiences on extraction of teeth.

The group company-Royal Health Care P. Ltd. Is also the member of Federation of Indian Exports Organisation- apex body for Exports under ministry of commerce on account of dental services being rendered to foreign nationals and earning foreign exchange for India. The cost of treatment usually is about Rs.5.0 lacs wherein similar treatment abroad would cost about Rs.50.0 lacs. Patients from countries like USA; UK; Europe; South Africa; Africa, Australia usually prefer coming to India and at ‘Royal Dental’ which is the trade name registered since more than 10 years in India. The need of the day is to get good quality of life with minimal suffering and at the earliest. The two principal services we render satisfies our goal and need of the day. “Same day fixed teeth with dental implants even in virtually no bone.” “Straightening and beautification of teeth in one day.”

We are now actively working for rehabilitation of Dental cancer patients which is a big challenge. We have an in-house lab where we have recently imported CAD-CAM machine and also CBCT imaging machine with FOV of 15×15 (one of the largest) and 3D printer which should help us in rehabilitating cancer patients fast, better and thereby help them lead an almost healthy life.

Congratulated for expertise in Implant community at World Congress on Oral Implantology at Hawaii, U.S.A.


Back to top
Enquire Now